The system was first discovered by prehistoric people, who left behind material evidence of their incursions (bones, tools, pottery, etc.).

Also of note is the exploration in 1892 by the engineer Gaupillat (cousin of the famous explorer Martel), who travelled along the Cocalhère-Basse up to the first body of water 1900 metres below ground.

In 1937, still in the Cocalhère-Basse, Robert de Joly led a team as far as a sump 2500 metres below ground, and reached a higher tier.

Then, from 1953 to 1966, the Speleological and Prehistoric Society of Gard-Ardèche (SSPGA) embarked on a methodical exploration of the whole synclinal group. In 1953, for example, starting from the spot that has since become the tourist chambers, the SSPGA discovered the Puits de l’Aventure, which opens onto an active underground stream. This was the first time that running water had been found in a complex (since then, a pumping station has been used to bring water to the surface).

The first developments began in 1965 at the external La Cocalière site. A tunnel (inclined gallery) was dug out to make it easier to gain access to the cavern. This is how the network of the Spéloufis (or the Beaumettes) was discovered in 1966, full of beautiful concretions and not yet developed.

As explorations were often hindered by bodies of water, pumping trials were carried out at several points (Peyraous) in 1953, but these were not a great success. Eventually the death of a diver at the Peyrou de Chadouillet in 1955 put an end to this reconnaissance method.

Fortunately, between 1969 and 1999, cave divers belonging to specialist groups were able to cross many sumps, at Peyrejal, the Goule de Sauvas, and La Cocalière. These diving sessions led to the discovery of several kilometres of galleries which showed how the networks of the system were interconnected. In 1999, B. Poinard went down to the Peyrou de Chadouillet in this way, going into water traps of up to -80 metres without reaching the bottom.

Finally, we should also mention that the exploration of the Beaume de Chazelles, which was started in 1937 by R. de Joly and taken up again between 1950 and 1970 by the SSPGA, is still going on today. This huge network has not yet been connected to those which are located further north. 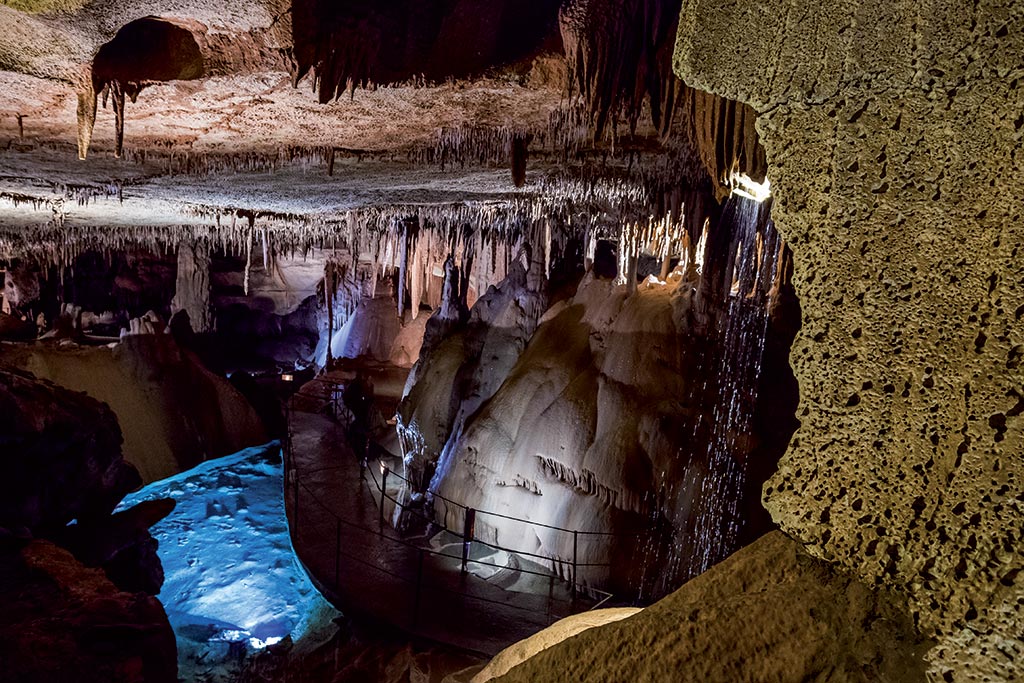